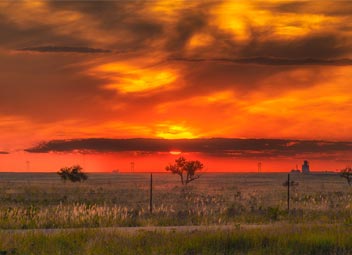 The Texas Panhandle is a region of the U.S. state of Texas consisting of the northernmost 26 counties in the state. The panhandle is a rectangular area bordered by New Mexico to the west and Oklahoma to the north and east. The Handbook of Texas defines the southern border of Swisher County to be the southern boundary of the Texas Panhandle region, though some consider the region to extend as far south as Lubbock County. The Texas Panhandle Press Association accepts members in the actual panhandle and a triangle formed by its southern tier, the southeastern border of New Mexico and a diagonal to the beginning, which includes Lubbock County.

West of the Caprock Escarpment and north and south of the Canadian River breaks, the surface of the Llano Estacado is rather flat. South of the city of Amarillo, the level terrain gives way to Palo Duro Canyon, the second largest canyon in the United States. This colorful canyon was carved by the Prairie Dog Town Fork Red River. North of Amarillo lies Lake Meredith, a reservoir created by Sanford Dam on the Canadian River. The lake, along with the Ogallala Aquifer, provides drinking water and irrigation for this moderately dry area of the high plains.
Interstate Highway 40 passes through the panhandle, and also passes through Amarillo. The highway passes through Deaf Smith, Oldham, Potter, Carson, Gray, Donley, and Wheeler Counties.

The Texas Panhandle has been identified as one of the fastest-growing wind-power-producing regions in the nation over the past decade because of its strong, steady winds.